The Vitara softens up as a mid-size crossover 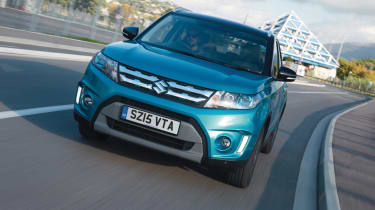 This is the new Suzuki Vitara. As the fourth generation of Suzuki’s long standing ‘soft-roader’, the new Vitara blurs the lines between a proper off-road vehicle and urban crossover.

For starters, it is available with either four- or two-wheel drive, with the latter drivetrain utilising Suzuki’s electrically operated AllGrip system. This, along with the car’s more stylish exterior, suggests the new Vitara is less rugged than its predecessors.

But with a class leading 185mm of ground clearance and two efficient drivetrains, the Vitara could be just as useful on rough-terrain as it is in city back streets. We head off to Cheddar Gorge to find out. 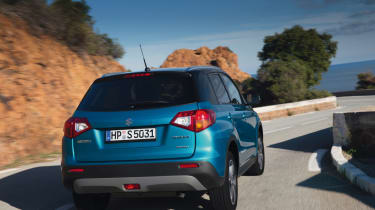 The diesel offers the stronger performance; although 0-62mph times are the same for both engines at a claimed 11.5sec, however, the diesel’s fuel economy is almost 25 per cent better, achieving a claimed 70.6mpg combined, compared to 53.3mpg.

Bragging rights come thanks to the Vitara’s low CO2 outputs, with the petrol achieving 123g/km and the more efficient diesel achieving as little as 106g/km in two-wheel drive cars. This makes the Vitara the second most efficient non-hybrid SUV on sale in the UK; its sibling, the Swift 4x4, ranks top. 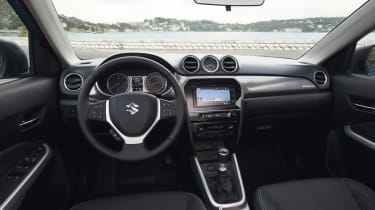 Optional satnav comes as part of a touchscreen infotainment display, while another popular option will likely be a two-part panoramic sunroof (it comes as standard on the SZ5).

With a 60:40 folding rear bench also standard, the Vitara can swallow 375 litres of luggage with the seats up, beating a key rival, the Nissan Juke, by 23 litres. Fold them down though, and the Vitara’s 710 litres of available space is some way off the Juke’s 1189 litres of space. 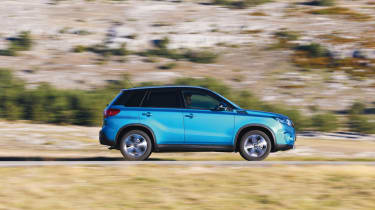 The Vitara might be marketed as a proper SUV, but slipping into our SZ5’s suede and leather seats, it feels just like a conventional crossover: tall, but very car-like.

The story is much the same once moving, because the Vitara rides like a normal hatchback, responding to swift steering inputs with minimal body roll. It’s well damped and as such feels comfortable being tilted into corners with the sort of exuberance something this tall shouldn’t tolerate.

Admittedly, the electric steering doesn’t provide any feel in Normal or Sport modes, but the latter setting does at least quicken the engine’s response to throttle inputs. The diesel feels particularly eager in this mode, pulling strongly through the mid-range. Rev it out, and the unit turns gruff and breathless, but work around 2500rpm and it feels faster than its 0-62mph time suggests.

Unsurprisingly, the petrol engine offers its best performance if you hang onto each gear a little longer, though it still never quite matches the acceleration of its turbocharged rivals. 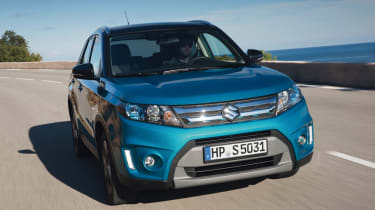 The Vitara’s manual gearbox features a nicely weighted lever - partly thanks to Suzuki’s use of a counter weight – making smooth, fast up-changes easy. Fast down-changes can feel a little notchy, though we suspect this will improve with higher mileage.

Venture off-road in an AllGrip equipped Vitara, and its hatchback-like ride initially feels a little too firm, as the body shakes its way over rocky surfaces. But drive the car down a steep decline or accelerate hard up an incline, and that planted stance helps keep the car’s centre of gravity low.

The AllGrip four-wheel drive is simple to use (it’s switch activated), and can automatically shift torque between the axles to minimise wheelspin and maximise drive. Switch AllGrip into Snow/Mud mode, and traction issues are sorted out automatically, while standard fit hill hold control and hill descent control (only available on SZ5 AllGrip models) make climbing and descending much simpler.

Don’t be fooled though, this is no out-and-out off-roader. A distinct lack of underbody protection (illustrated most clearly by a low hanging exhaust box) and the fitment of road tyres confirm the really rough stuff is out of reach. For that, Suzuki makes the Jimny.

Though the Vitara is part of a segment dominated by the Nissan Juke, the Skoda Yeti stands out as a more directly comparable rival. At first, things don’t look great, because the Yeti is equally as impressive off-road, and comes available with more potent engines.

The Suzuki’s use of scratchy, hard-touch plastics on the dash also make the Yeti feel more premium inside, but the Skoda’s £16,915 starting price is close to £1000 more expensive. 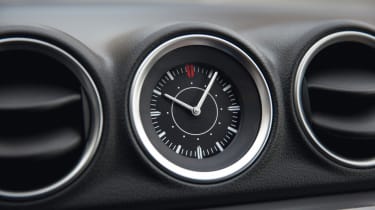 Another strong selling rival is the Fiat 500X. The 500X’s four-wheel drive system is shared with the Jeep Renegade, and as such it is impressive given its size. It also undercuts the Vitara with a £14,595 starting price, but high running costs and the 500X’s bulbous looks could quite easily send buyers elsewhere.

Two-wheel drive petrol Vitaras start at £15,929, but AllGrip SZ5s require £20,599. Opt for a diesel SZ5 AllGrip, and you’ll need to spend an additional £1400, meaning the Suzuki is entering waters patrolled by far larger SUVs (including the Nissan Qashqai).

It’s the Suzuki’s on-road handling, nicely weighted controls and cheap running costs that will help justify its price tag. And with target sales of just 6000 units per annum, it’ll also be one of the most exclusive options in the class.