Based on the basic Mini One, this limited edition hatch has real credibility 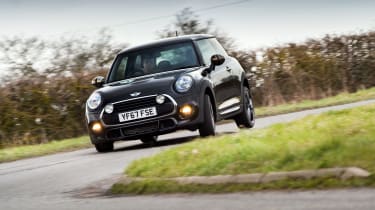 Take a small car with a tiny, low-powered engine, then kit it out with a sharper, more focussed chassis to create an accessible and fun car that you don’t need a job in The City to insure. It’s a theory Peugeot put into practice in the ’80s and ’90s with its smaller Rallye models, but the concept has gone out of fashion as hot hatches have got bigger and more powerful. Until recently, that is. VW’s Up GTI is a refreshingly small, cheap but joyful car, the Renault Twingo GT has a similarly fun attitude, and now Mini wants a slice of the action with its 1499GT.

Based on the three-door Mini One, the 1499GT uses the basic car’s three-cylinder 1499cc engine (hence part of its name), and is equipped with the firm’s Sport Chassis. Its name, as well as the stripes down the sills, are familiar to Mini connoisseurs as they hark back to the 1275GT Cooper replacement from the ’70s.

The new car is a limited edition model, but rather than curtailing production at an arbitrary number Mini has chosen to make 1499 of the GT to really make the most of the name it’s given it. 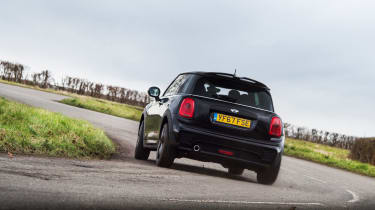 With humble Mini One origins, the 1499GT’s engine doesn’t seem all that impressive, but then, that’s kind of the point. Its 1.5-litre turbocharged three-cylinder motor only just breaks the three-figure power threshold with 101bhp, while torque is at 140lb ft. Having over 100bhp, however, hasn’t helped the 1499GT slip under the 10 second 0-62mph threshold, completing the industry-standard dash in 10.1sec.

The transmission is as basic as possible, with a manual six-speed gearbox driving the front wheels only through an open differential, just as it does in the ordinary Mini One manual.

Where the 1499GT really differs from a regular One is its chassis, which is fitted with the sports suspension package – usually a £150 option on Mini hatches, apart from the John Cooper Works where it is standard. The 1499GT also comes on performance 205/45 17 Dunlop SportMaxx RT2 tyres.

To give the 1499GT a sporty appearance to match its chassis, Mini has added the JCW styling kit, clear indicators, and black 17-inch alloy wheels to its exterior, as well as the retro gold side stripes. Inside there’s sports seats, black details and a JCW steering wheel. The spotlights and Union Jack mirror caps of our test car were optional extras.

There’s no point in skirting around the subject, the Mini One drivetrain in the 1499GT is a long way from being a pleasure to use. It sounds thrummy and old fashioned, seems to take an age to rev and doesn’t possess the necessary shove to make the car feel in the remotest bit sporty in a straight line. There could be some ancient 1920s motorbike engine under the bonnet, for all its worth.

That said, if you use full throttle when the engine happens to be at around 1500 to 2000rpm there is a distinct surge forwards, but that force rapidly diminishes and is totally untraceable at higher revs or smaller throttle openings. 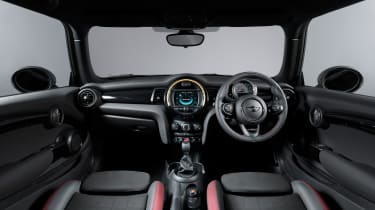 Some exceptionally high gearing, tailored towards economy, exaggerates the engine’s lack of grunt. The 1499GT’s impressive official combined 57.6mpg suggests the ratios do their job, but some low sprint-style gearing would really help the 1499GT feel more sprightly.

It’s a good job then that the sports chassis and the performance tyres grant the 1499GT a respectability on twisty roads that some of the best, most focussed modern Minis have enjoyed.

The ride is just on the cusp of being too firm on UK roads. The chassis is noticeably tense and alive over bumps and crests, but it still filters out any really rough tarmac. With the tyres firmly in touch with the ground and the chassis providing a degree of comfort, you can make good progress. Well, as good progress as the engine will allow you to make. 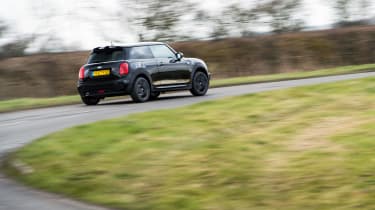 With not a lot of power to work with, the 1499GT feels as though it needs to be driven with absolute commitment to maintain as much momentum around corners as possible. But the GT relishes being driven hard, and the front end resists understeer admirably. And, although it’s not exactly throttle-adjustable, the whole car is eager enough for it to feel as though the back end is helping guide you round corners.

Get too keen with your entry speeds (easy to do when you’re chasing every last drop of momentum) and the front will gently push into understeer. Even so, it stays composed and doesn’t snap into oversteer even if you shut the throttle abruptly. You can also use any understeer to help scrub off any extra speed – a driving style often cited as the quickest way to drive old Minis. So it isn’t just the stripes and styling of the 1499GT that’s retro.

The thing is, because of its lack of power, no matter how much you push the 1499GT, you’re never really going all that fast. You can keep it on the legal side of the speed limit even when using full throttle a lot of the time. That’s useful, because eking out every last drop of performance from the car, and feeling it cope commendably with some hard driving, is a real pleasure. The chassis makes the 1499GT an enjoyable car, no matter how much the engine might try to ruin the fun. 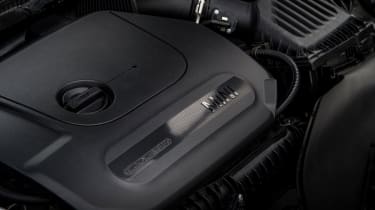 At £16,990 the 1499GT is still cheaper than the most basic Cooper. It might be 33bhp down on the more expensive car, but with the sport suspension, JCW seats and steering wheel, and 17-inch wheels, the GT comes with some desirable equipment as standard. Plus, the 1499GT will be cheaper to insure.

The Ford Fiesta ST-line, with its 1-litre 138bhp three-cylinder engine, is, in concept, close to the Mini. However, although it has a more powerful engine, the Ford doesn’t possess an ST-like chassis; instead it feels more like a regular, not-so-sporty Fiesta.

VW’s new Up GTI might be down on size compared to the Mini, but it’s low weight, greater power and much cheaper price (£13,750) make it a contender. It’s a fun, dependable car that’s certainly enjoyable to drive, even if it doesn’t cope quite as well as the Mini when really pushed hard.