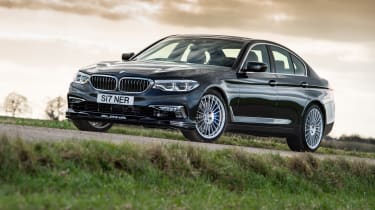 Alpina has always flown underneath the radar, delivering cars that manage to mix shattering performance and sharp dynamics with low-key looks and a dash of everyday refinement. The all-new Alpina D5 S also aims to deliver on all these counts, but with the added bonuses of frugality and a continent-crossing touring range.

Based on the new G30 BMW  530d, the D5 S features a more powerful version of the turbocharged 3-litre straight-six diesel, an upgraded chassis and brakes, plus heavily revised visuals and a bespoke interior. Crucially, it’s also the first time any D5 model has been fitted with BMW’s xDrive four-wheel-drive system.

As with all Alpina models, the D5 S benefits from a number of subtle exterior modifications, the most notable of which is the deeper front spoiler complete with prominent Alpina logo, which won’t be to all tastes. The same could be said of the, admittedly optional, pinstripes that run down the car’s flanks. New for this car – and other Alpina models, too – are the 20-inch Classic multi-spoke wheels, which are forged for the first time, resulting in a weight saving of 15kg per corner. 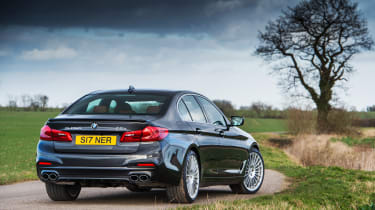 Inside, the D5 S is peppered with Alpina tell-tales, including blue and green stitching for the steering wheel, a numbered plaque on the transmission tunnel and a discreet logo set into the dash ahead of the driver. There are also bespoke Alpina graphics for the TFT dials, complete with trademark blue faces and distinctive green needles when in Sport mode. It all adds up to create an exclusive atmosphere that’s a cut above the average BMW.

The same could be said of the driving experience, which at once manages to combine taut handling and strong performance with surprisingly hushed refinement and easy-going comfort. It’s not a cheap choice, but the Alpina D5 S is a hugely desirable all-rounder.

Being a manufacturer in its own right means that Alpina’s cars are much more than lightly fettled BMWs – and the D5 S is no exception. Like the standard 5-series, the Alpina is built around the same light and strong architecture as the larger 7-series – although it does without that car’s expensive Carbon Core. The basic suspension layout is also shared, but Alpina fits its own modified front wishbones that add one degree of negative camber for sharper steering response and greater grip. The adaptive dampers and the electrically assisted steering have also been recalibrated.

Our test car was also fitted with the Alpina Sport Plus suspension package that combines BMW’s four-wheel steering and anti-roll systems. The former has been tweaked to deliver up to 2.5 degrees of rear steering angle in either the same or opposite direction as the fronts, boosting both low-speed agility and high-speed response. The latter uses electronically actuated anti-roll bars that can stiffen in milliseconds to check any wayward body movements.

The brakes get the Alpina treatment as standard, with four-piston calipers clamping larger 395mm vented discs at the front. Finally, the D5 S sees the first use of Pirelli tyres on an Alpina since 1985. Developed specifically for the brand, the P Zeros measure 255/35 ZR 20 at the front and 295/30 ZR 20 at the rear.

Under the bonnet of the D5 S is a lightly fettled version of BMW’s familiar straight-six diesel. Switching out the regular car's TwinScroll single turbocharger for a pair of smaller variable-geometry turbos and revised intakes improves response, while changes to the electronic brain and cooling system have helped liberate an impressive 322bhp (up from 261bhp in BMW’s 530d) and a stump-pulling 516lb ft of torque (up from 457lb ft), the latter figure available from just 1750rpm.

So despite weighing 1870kg, the D5 S will demolish the 0-62mph sprint in a frankly hilarious 4.9 seconds (half a second quicker than the 530d) before romping on effortlessly to a 171mph top speed (rather than a limited 155mph). Yes, that’s right, a near two-ton diesel saloon that’ll pull down the trousers of a Porsche Cayman. 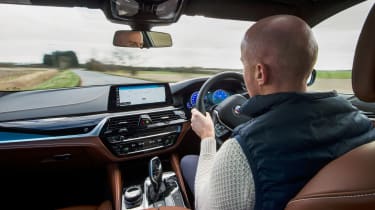 Yet it’s the way the D5 S delivers its performance that’s noteworthy. There’s no histrionics here, simply squeeze the throttle and ride that tidal wave of torque. Of course the engine will spin happily to 5000rpm, but there’s simply no need, because even at half those revolutions the Alpina will be able to accelerate quickly enough to smoke most hot hatches. The six-pot sounds good too, as it does in the standard 5-series, delivering a deep, growly soundtrack that’s barely recognisable as a diesel.

It’s matched to the familiar ZF eight-speed auto, which shuffles ratios unobtrusively in auto mode and shifts quickly and crisply when you’re in a hurry. The only niggle is the Alpina Switch-Tronic layout, which replaces the standard wheel-mounted paddles with a pair of fingertip-sized buttons that are all to easy to fumble when in a hurry.

Essentially, the D5 S drives like a standard 5-series, but just a little bit better. If that sounds a little damning in faint praise, then bear in mind that the BMW is pretty much the pick of the executive class when it comes to dynamics. It’s a big car, but it responds with surprising enthusiasm to being hustled. 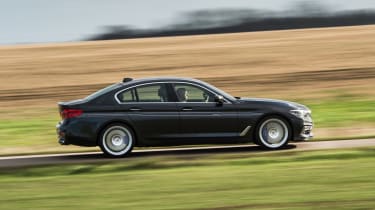 As with the standard car, the steering is a little remote, but it’s decently weighted and precise. It’s aided by the four-wheel-steering set-up, which delivers a hilariously tight turning circle at parking speeds and impressive agility when you up the pace. By actively pointing the rear of the car into a bend it reduces the effort on the front tyres, helping to generate even more turn-in bite. The Pirellis grip hard, too, so it’s not long before you’ve forgotten about the D5’s fairly hefty dimensions and are attacking a series of corners with the sort of intent normally reserved for the smaller 3-series.

With the dampers in Sport or Sport+, body control is strong, with mid-corner bumps effectively steamrollered into submission as the Alpina manages to both glide over the surface and keep a firm grip on proceedings. There’s adjustability in the handling, though, with the four-wheel-drive system sending enough torque to the rear axle to subtly alter your line – it never gets anywhere near wayward, but there’s enough movement to warrant seeking out the twistier routes home.

Yet the Alpina’s biggest party trick is its ability to switch from sports saloon to sybaritic saloon at the touch of button. Engage Comfort mode and the D5 smothers bumps and torn tarmac, while the engine noise recedes to a very distant murmur. The big wheels occasionally struggle with potholes and sharp ridges, which send a muted shudder through the cabin, but in all other respects the Alpina has most luxury saloons licked for refinement. 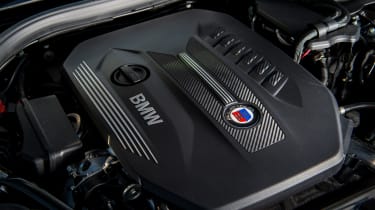 Yet to judge the Alpina by these standards is to slightly miss the point. For starters, these rivals are mass produced machines while the D5, despite its visual similarities to the standard 5-series, is essentially a hand-crafted special – and it feels it too, particularly from the inside.

It drives differently too, it’s blend of performance, agility and refinement being difficult to find elsewhere. Of course diesel is becoming a dirty word, but it’s hard not to like a car that combines a 4.9 second 0-62mph time and 171mph top speed with claimed economy of 46.3mpg and a potential touring range of 600 miles. Oh, and then there’s the exclusivity. How exclusive exactly? Well Alpina UK reckons it’ll shift fewer than ten in 2018.