In great weather and on perfectly smooth roads the Works GP could be great, but it struggles where our favourite hatches shine brightest 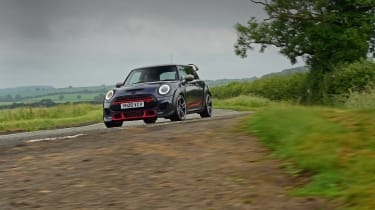 We’ve had to wait since 2013, when the current F56-generation Mini was launched, for a Works GP model to follow on from the first two generations.

Mini’s engineers famously described the original Works GP as being the Mini equivalent of a BMW M-car, or even a CSL, and with a powerful engine, uprated suspension, no rear seats and a hefty-looking cross-brace across the rear cabin, it wasn’t hard to see the comparison. 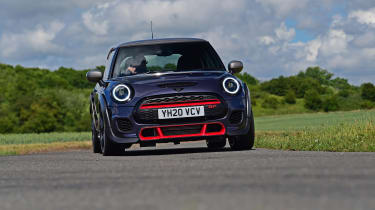 The second generations swapped supercharging for turbocharging and delivered even greater power and aggression, and the latest car takes that another step further. It’s the quickest on paper and the least subtle in the metal yet – characteristics that should no doubt appeal to the 575 UK buyers. First though it needs to impress us where it matters: on the road.

The latest Works GP, unlike its predecessors, is automatic-only – an eight-speed torque-converter auto at that, rather than a snappy DCT. It’s bolted to BMW’s B48 turbocharged inline-four, a two-litre unit also found in other Minis as well as the current BMW M135i.

It certainly delivers on paper: like previous GPs the latest car punches above its weight for the class, its M135i-matching 302bhp output (from 5000-6250rpm) sparring with Civic Type Rs rather than Fiesta STs. 332lb ft of torque from 1750-5000rpm is chunky for something that weighs 1255kg too, and while that number sounds a lot in isolation for a small hatchback with no rear seats, it’s still less than the porky Fiesta.

As a result, Mini quotes a 0-62mph time of only 5.2 seconds, and with no limiter to constrain it, it’s among the faster “BMWs” you can buy with a 164mph maximum. A pair of cannons peek out from the rear bumper to give the GP some aural character (though like all recent Minis the vent in the bonnet at the other end is, sadly, just for show). 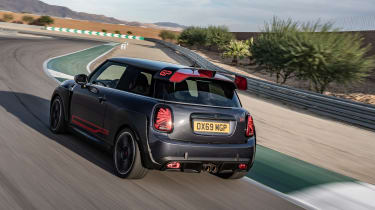 The Works GP’s chassis uses a more focused take on Mini’s usual struts and multilink layout. GPs ride 10mm lower than JCWs thanks to bespoke springs, the dampers too are specific to the GP (and passive, so no electrickery here), camber has increased, and the bushes and engine mounts are stiffer.

The boot’s the best place to start when examining the interior, shorn of its rear seats and with the usual cross-brace serving as body strengthening. It’s a fairly substantial thing, made all the more obvious here in a coat of bright red paint, which makes the muted treatment of the rest of the cabin a bit disappointing. 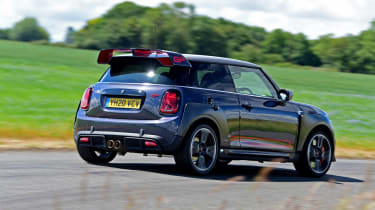 The GP also makes use of 3D printing, though largely for fancy details – the steering wheel’s centre-marker and the gearshift paddles both use the technology for their intricate designs. There’s a fully digital instrument display for the driver too, like that of the all-electric Mini E.

And then there are those arches – carbonfibre-reinforced plastic, essentially the same stuff that BMW’s i3 and i8 were constructed from. They’re purely decorative in this instance, though it’s a good sign that producing such a material has become affordable enough to attach large quantities of it to relatively humble cars.

First impressions: slightly more steering heft than other Minis, no doubt a function of the racier geometry and fatter rubber. Similar off-centre response though – wiggle the wheel in a straight line and the GP shimmies its hips like a cat ready to pounce. The throttle’s sharp too. These BMW fours have always been responsive, delivering a slug of torque from what seems like tickover, but with so much on tap and less weight to drag around than say, an M135i, it takes just a tickle of throttle to send the Mini leaping forwards.

Firm ride too. Not crashy as such, more... bouncy. More than name or styling, modern and classic Minis are linked by their habit of pogoing on uneven surfaces. Cracks and lumps are dealt with pretty well – fairly sudden, but well-controlled and with minimal shock – but over wobbly tarmac things never really settle. 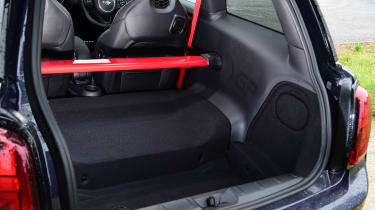 The tradeoff is zero roll or pitch, and even less slack than usual to the way the Mini’s front end responds to steering inputs. It requires the same kind of adjustment you need in a modern Ferrari, turning and then suddenly having to wind off lock to avoid mowing the grass on the inside of a corner. There’s no shortage of grip, even in the wet. Turn the wheel and it just scoots around as if you weren’t trying hard enough. Throw in short overhangs and the wider track and it’s a demon in direction changes too, settling and turning the instant you’ve finished the previous corner.

It does struggle to put its power down in these conditions though, and bumps and cambers just exacerbate the problem. It doesn’t take too much to overcome the traction control and have the front axle hammering up and down like it’s attached by leaf springs. Get past this point – things begin to settle in third or fourth gear – and it’s wildly quick. Probably one of the quickest hot hatches we’ve tried in a straight line, at least seat-of-the-pants, thanks to the Mini’s small stature and the amusingly loud blare from the exhausts.

Revvy too, in a way this engine struggles with in other applications – it might make the same power as an M135i, but do the Pepsi Challenge and you’d assume they were completely different engines. It’s just a shame the auto ‘box adds little to the experience, doing the job and little more. It’s eager in auto, and naturally manual offers more control, but the slightly tardy response and dull action of those fancy paddles disconnects you from the action. 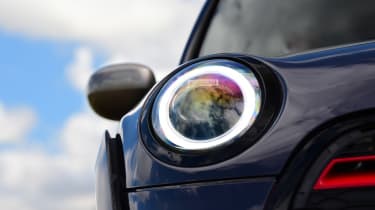 Perhaps the biggest issue though is that any combination of steering, throttle and bumps just leaves the GP feeling unruly. With any directional or throttle input the aggressive limited-slip diff tugs at the wheel, and with little actual feedback through the steering the correction process takes twice as long as you fight the wheel. Bumps throw yet another spinning plate into the mix.

If Mini had eased off on one of its more extreme facets – steering, diff, throttle response, ride – its other qualities would shine much brighter. Some cars flow down a road and work with the driver, but as things stand the GP feels a little too much like a car fighting with itself and its pilot, entertaining only in small doses.

Mini will make 3000 Works GPs in total, 1000 more than it did of previous models, though only 575 will reach UK shores. What’s impressive is the price. In an era where Meganes can cost seventy grand and A-classes more than £50k, you’d swear the Works GP would be a £40k car, so the £33,895 price tag looks quite reasonable, and more than appropriate for the car’s bespoke touches and considerable performance.

That figure is broadly similar to the current forefront of 300-horsepower hatches. Few are as intense as the GP, but the majority would be easier to live with and several, such as the Civic Type R, non-Trophy Megane RS and Hyundai i30N, make much more pleasant road cars and notably, all are offered with manual transmissions. In terms of size equivalence the Mini’s only real close rival is the Ford Fiesta ST, which even in £26k Performance Edition trim is far less potent than the Mini, but again a better road-going hatch.