It may not be the sharpest, fastest or most involving topless supercar, but in many ways it’s the most memorable. 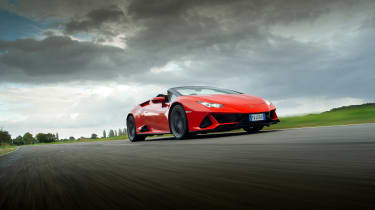 If a supercar’s mission in life is to entertain both drivers and bystanders, and generally be outrageous, then chopping the roof off a V10-powered supercar should make it the ultimate of the breed. The question is, do the benefits outweigh the disadvantages with the new Lamborghini Huracán Evo Spyder?

The launch of the Evo coupe last year introduced not just the application of a Performante-spec upgrade to the ‘regular’ Huracán’s 5.2-litre V10, but also a reformation of the car’s dynamic package in order to improve its ability to go around corners. To do this, Lamborghini decided to fit as standard the previously optional variable-ratio dynamic steering along with a rear-wheel-steering system derived from that in the larger Aventador S. 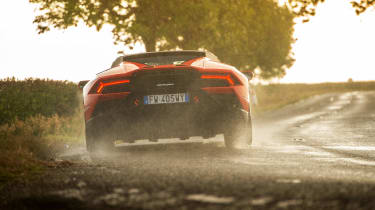 Like its coupe cousin, the new Evo Spyder gets what is effectively the 5.2-litre engine out of the previous-generation Huracán Performante, with its titanium intake valves, 631bhp and 443lb ft of torque.

A big, high-revving, naturally aspirated engine is a rarity these days, and the thunderous soundtrack of this car will be more than enough reason for buying one to many potential customers. It’s combined with the now ubiquitous seven-speed dual-clutch transmission, offering either relaxed auto changes or very quick gearshifts with paddles behind the steering wheel.

The added weight of the Spyder means the 0-60mph time suffers, losing two-tenths to the coupe, but 0-62mph in 3.1sec feels more than fast enough – as does an open-air top speed of 202mph. 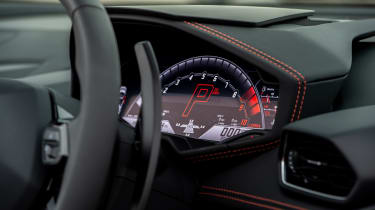 Like the coupe, there are acronyms aplenty with the Evo Spyder, with LPI, LDS and ANIMA amongst them. Essentially, a powerful electronic brain (LDVI) integrates a wide range of dynamic features, some of them essentially predictive, with the objective of tailoring the car to the road and driver’s preference at any given moment through a combination of second-gen adaptive damping, torque vectoring, (seamlessly integrated) rear-wheel steering, variable steering, four-wheel drive and so on.

The Evo Spyder’s canvas roof takes 17 seconds to open and close and activates at the press of a button at up to 31mph. The cabin also benefits from an integrated duct between the headrests that reduces turbulence, and the small rear window can be lowered electrically even with the roof up to allow more glorious V10 engine noise into the cabin 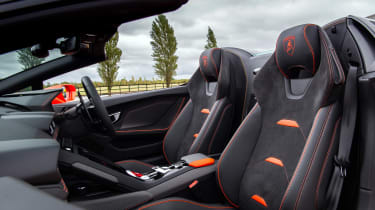 At a substantial 1542kg ‘dry’, the Evo Spyder is a hefty beast, but it hides its mass well, helped substantially by the engineering tech that’s been incorporated into this ‘gen2’ Evo model. The way you can twirl the wheel at parking speeds thanks to the dynamic steering reminds me of an old Fiat Punto with the ‘City’ button pressed, but at speed it’s a faithful and accurate partner, albeit one that doesn’t tell you a lot about what’s really going on at the road’s surface. In the dry that doesn’t matter – there’s so much grip available – but in the wet it can be hard to judge an appropriate turn-in speed when you’re going quickly. The Evo isn’t a flamboyant, slidey sort of machine on the road at least, regardless of what mode you’re in, and when the rear does break traction you can quickly feel drive to the front axle trying to pull the car straight. If it does get out of shape, you quickly start to feel that considerable mass on the move.

While the roof works well, the cabin is less of a triumph. The driving position can be very uncomfortable for taller drivers (legroom is in short supply) and the new Tron-like infotainment system may offer gesture control, but never really gets more intuitive with experience in our opinion. Best then to suffer in silence, and unleash some more revs 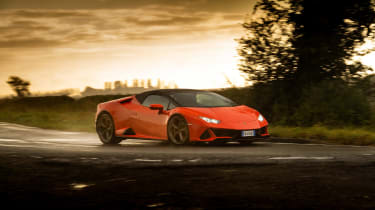 Perhaps the coupe’s biggest failing was those ANIMA driving modes, and sadly that flaw is still present in the Spyder. There’s Strada (road), and Sport and Corsa (race) modes, but no way of mixing and matching settings with an Individual option. It’s such a shame, because essentially there’s no way of getting the more compliant ride and stealthy exhaust without the comically hard ride – or to put it another way, to lose the auto kickdown and upshift, have the quick gear changes and scythe-like throttle response, but not have the seized-solid ride and Kings Road volume levels. Such a set-up promotes the idea that the Evo Spyder isn’t really a car for proper driving, more for the typical instant supercar thrill. And yet…the Evo Spyder is such a visceral experience it doesn’t need to justify itself in any way at all. It’s not about lap times, or kerb weight figures: it’s just the joy of dropping the roof, savouring the shock and awe of the V10 and driving something that completely nails what a supercar is all about. 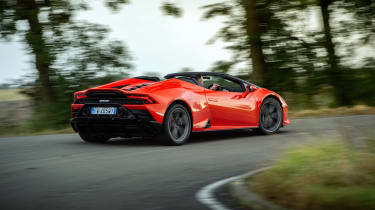 While the roof works well, the cabin is less of a triumph. The driving position can be very uncomfortable for taller drivers (legroom is in short supply) and the new Tron-like infotainment system may offer gesture control, but never really gets more intuitive with experience in our opinion. Best then to suffer in silence, and unleash some more revs. 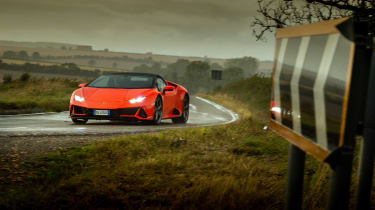 The Lamborghini Huracán Evo Spider is priced from £218,137, putting it on par with the Ferrari F8 Spider (£215k) and not too far away from the McLaren 720S Spider (£237k). It is worth noting that the Huracán doesn’t quite hit the same high notes as its rivals dynamically, but for drama there’s nothing in it.

Options are typically vast and expensive, but the same could be said of its rivals, although it is worth noting the Spyder we tested in these images was pushing £272,000 with its near £54k-worth of options.

Outside of the open-top mid-engined supercar mould, the Mercedes-AMG GT R Roadster is more hot-rod than supercar, but sits at £178,675 and is no slower on the road. Likewise the even more focused McLaren 600LT brushes the £200k mark and combines the most engaging mid-engined driving experience without a roof panel in place.