It may be nearing the end of its production, but this WRX STI on steroids is extremely rapid once its idiosyncrasies have been learnt. The S209 is a car that really gets under the skin. 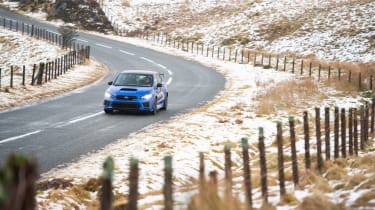 The Japanese domestic car market has seen some very special Subarus over the years, but the latest ‘S’ model to emerge from its in-house motorsport and performance division – Subaru Tecnica International (STI) – is for the American market only.

As the current generation of STI nears the end of its life (it went off sale in the UK during 2018) just 209 of these very special STIs will be made, either in blue (with grey wheels) or white (with gold wheels). Thanks to the generosity of a kind owner, evo has driven the car in the UK, but does it recapture the magic we loved so much about sporting Subarus of old? 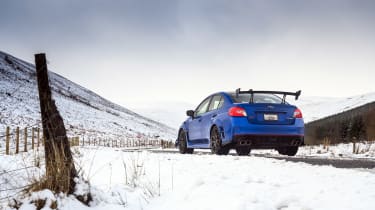 The S209 is powered by the familiar EJ25 flat-four turbocharged engine, displacing 2.5 litres and in this guise making 341bhp and 330lb ft of torque. Those are relatively small increases over the standard (2020 US spec) STI, which makes 306bhp and 290lb ft, but a lot of work has gone into achieving those gains. The S209 features upgraded valve gear, a new air intake and higher flow rate fuel pump and injectors. The compression ratio has been raised, there’s a larger HKS turbo running more boost, and the intercooler runs a water spray system triggered – somewhat bizarrely – by paddles behind the steering wheel. Yes, those paddles aren’t for grabbing gears, as the S209 is only available with Subaru’s familiar six-speed manual transmission – and that’s something that makes us very happy.

Subaru America doesn't quote performance statistics for the S209, but with the numbers in question, plus a kerb weight of 1580kg, we’d guess it’s easily sub-five seconds to 60mph and a top speed nearer 160mph than 150mph. 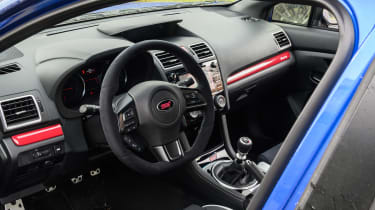 When reading through the technical information on the S209 it doesn’t take long to realise this is far more than just a run-out special edition with a bit more power; indeed, there’s inspiration from the N24 class-winning STI race car here as well as plenty of the juiciest items from STI’s toy cupboard.

Wheelarch extensions make the S209 body wider by 48mm, enabling a 15mm broader track, while the body is strengthened and the roof is made from carbonfibre. Further stiffening around the suspension areas takes the form of cross braces front and rear with metal ball joints (these increase lateral stiffness but allow longitudinal movement to the benefit of the overall ride quality), and the rubber element has also been banished from certain joints in the front and rear suspension too, which takes the form of a bespoke Bilstein set-up.

The S209’s obvious aero enhancements consist of a new front air dam with canards, and that massive, adjustable rear wing made from carbon, but there are flat underbody sections too. Its Brembo brakes (with six-pot calipers on the front axle) feature upgraded pads, and the 19-inch forged BBS wheels are wrapped in a sticky Dunlop Sport Maxx GT600A tyre (265/35/19). 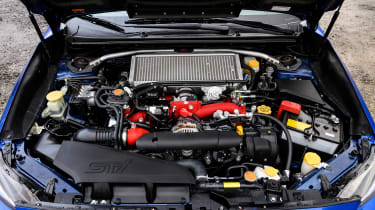 There really is nothing like a fast Subaru. It’s one of those cars where you could be placed in it blindfolded, yet recognise it from the moment the starter motor engages, and then have that confirmed by the clutch take up, the feeling through the drivetrain, the beat of the engine. It’s a unique experience, and all the better for that. Long may it continue.

However, after reading the fabulous spec list of the S209, those initial few miles provoke some mixed feelings. Nestled in the Recaro seats, grasping a lovely man-made, suede-clad wheel, everything feels just right, and while the cabin is now dated compared with many an upmarket European hot hatch, given the S209 is all about the driving then really, who cares? It all works, and only the lack of an oil temperature gauge (when there’s all sorts of other random info available) grates. But it’s the flat-four that seems underwhelming. The S209 features a new exhaust that reduces back pressure (and also saves some weight) and yet the car is quiet, and the engine lazy, and unresponsive. Tweaking the driver mode dial to ‘Sport’ picks things up a little (Sport Sharp is almost too responsive) but doesn’t hide the fact that the Scoob needs a good 3500rpm on the rev counter before it really wakes up. Moreover, there seems to be very little progression to the throttle pedal; the S209 appears to have just two speeds, slow and flat out. 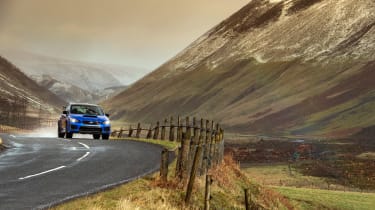 If you’ve also been driving at pace along a typical British B-road you may also feel a little vexed, because far from crushing the road into submission with its four-wheel-drive traction, the S209 can feel a little nervous. To be fair, cold, wet, bumpy lanes are hardly what the somewhat track-biased tyres and suspension set-up of the S209 were aimed at, but there’s a surprising amount of torque-steer and an ever-so-slight doubt on turn-in that the tyres have really bitten into the curve. Take a breath. Send a bit more torque to the rear axle on the DCCD control, and adapt your style. Now the front is less nervous, and using the brakes more on entry to a corner pins the front down; the motor needs revs – thrives on them – so work on those gear choices, and slowly but surely it all comes together. When it does, the S209 is an absolute rocket across the ground and crucially, a really involving and three-dimensional experience with it. Yes, the 2.5-litre motor has nothing like the appetite for revs and aggression of the old 2-litre STI motors and their 8000rpm rev limit, but flicking between the ratios and executing perfect heel-and-toe downshifts while leaning on the powerful brakes are something to cherish. There’s a little more body movement than you might imagine, but once you’re dialled in to how the S209 likes to set an attitude into a corner, your confidence builds rapidly. Interestingly, it’s a surprisingly easy car to live with; the ride settles at speed, it’s largely quiet, and there’s Apple CarPlay. 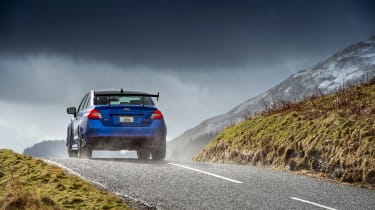 Given the S209 isn’t even on sale in the UK, then rivals are hard to make a case for. Traditionally, there’d have been a Mitsubishi Evo to square up against it, but these days it’s more likely to be high-end, all-wheel-drive hot hatches such as the Mercedes-AMG A45 and Golf R that constitute a natural rival, or more extreme front-drive cars such as the Mégane RS Trophy-R.