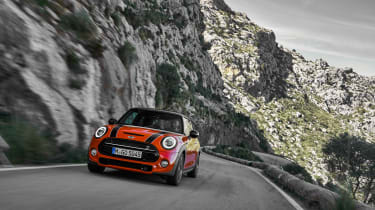 The staple of the Mini range, the three-door hatch, underwent a mid-life facelift last year, but should the Cooper S still be on your shopping list if you’re after a £20k hot hatch? Most of the changes were subtle; mechanically the Cooper S’s 2-litre turbocharged engine was revised to make it more economical although power remains the same as before.

Externally there’s now some black trim that would have been chrome before, a few new Mini logos and the ability to personalise the side repeaters with your chosen words. What you won’t miss, though, are the new LED rear lights that feature a bold Union Jack pattern behind the lenses. 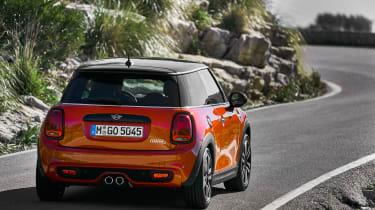 Under the bonnet of the revised Mini Cooper S is a 2-litre turbocharged four-cylinder engine that puts out 189bhp and 207lb ft of torque. Just as before. As a result, the 0-62mph time of 6.8sec for the manual car is exactly the same as the pre-facelift car.

But Mini has changed the engine in pursuit of better fuel economy; the turbo has been fashioned from a new material and the injection system now delivers fuel at a higher pressure. These changes have contributed to the whole car’s weight increasing by 40kg, it now weighs in at 1200kg.

As standard the Mini comes with a six-speed manual gearbox but an optional seven speed dual-clutch automatic is available. The swift changes from the auto reduce the Cooper S’s 0-62mph time by 0.1sec.

With such minor changes to the engine, and no changes to the car’s performance, the rest of the facelifted Mini has remained much the same. The chassis has been retuned slightly, but only to compensate for added weight from the updated engine.

This facelifted Cooper S, however, feels like it’s closer to Minis of old. The ride is firm and tense, like it’s always ready to react but it’s far from being uncomfortable; the standard 16-inch wheels on the Cooper S Classic do a great job of filtering out the worst of the bumps and even the larger 17-inch wheels and 205/45 tyres don’t upset it too much. Initially we drove the car in Mallorca on its launch and the smooth Tarmac on the test route left questions as to how it would perform on craggy UK roads, but further experience in its homeland suggests it’s as comfortable here as it felt on the Spanish island.

The engine is strong, capable of propelling the Cooper S at a decent rate even from low revs, and responds promptly to throttle inputs. However, even with the new revisions, the motor still lacks some of the character of previous genertions.

The gearboxes aren’t anything desperately special, but we’d recommend the manual unless you’re really watching the pennies and fancy the better economy and lower CO2 emissions offered by the seven-speed auto. The manual’s shift is pretty quick and accurate although not desperately inspiring although there’s nothing actually obstructing or stopping you from making quick clean shifts. The dual-clutch auto is fast enough, but will change up itself when you hit the limiter even if you have it in manual mode. It won’t, however, change up twice if you manually select a higher gear close to its own upshift point, which is nice.

The chassis comes good on its promise of being alert when you point it towards a corner. Initial roll is minimal and the nose darts towards the apex with that typical Mini energy.

When you switch it on, the Cooper S is in its default driving mode called Mid. There is a Green mode geared towards more economical driving and Sport, which is self-explanatory. With no adaptive dampers only the throttle map, the engine noise and the steering weight changes. It’s only the steering that is noticeably different as you toggle through settings, though. It gets unnecessarily heavy and loses the smooth linearity of Mid. The lighter steering also seems to suit the Cooper S’s chuckability, too.

The brake pedal is the only one of the controls that doesn’t offer the same immediate effect, as initial bite seems dull. However, the action is very progressive with each millimetre of travel offering incrementally more brake pressure.

Such fantastic control over the brakes allows you be on the middle pedal right up to the apex of a corner, increasing the strong front-end grip, even on the road. The Cooper S stays stable and secure, even as you push it hard. There’s a hint that the back-end might become unstuck as you shift from the brakes to the throttle and the car is momentarily not under load, but it never materialises as anything that needs correcting. 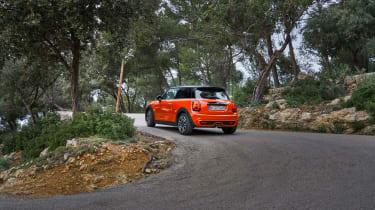 There are friskier, more adjustable and more focussed hot hatches on the market, but the Mini Cooper S isn’t meant to be the most extreme car, instead it’s very competent while still being fun and exciting.

Even removing the roof doesn’t diminish the Cooper S’s attributes too much. Yes, the Convertible feels a little slower and delayed in its reaction compared to the hatch, there’s significant wind noise over 60mph, and you can feel the body flex over bumps. But over a twisty road it doesn’t come unraveled as you pitch it into corners, even the wobbly body is less noticeable when you put load into the chassis.

With prices starting at £20,925 the Cooper S isn’t the most powerful car in its class and perhaps doesn’t have the on-paper performance figures offered by cars of a similar price. But then, the Mini feels more sophisticated and entertaining than many other small hatchbacks, only Audi’s A1 has the same levels of refinement and solidity but the 40 TFSI model is only a smidgen quicker, can only be had with an automatic gearbox and isn’t as much fun to drive.

Up until recently we’d have included the Peugeot’s 208 GTi and the DS 3 Performance as potential Cooper S rivals but with both of those models having been discontinued it’s left to the likes of the Ford Fiesta ST and Volkswagen Polo GTI as the most obvious competition for the Mini. The Fiesta is priced at a similar level with the range starting at £20,700 for the ST-2 and rising to £22,450 for the ST-3 and it’s well equipped, too. It perhaps lacks the badge cachet of the Mini but it’s more entertaining to drive and while it might only pack a three-cylinder engine it’s eager and tuneful.

The Volkswagen Polo GTI is a little more expensive than the Cooper S with prices starting at £21,660 and rising to £23,160 for the GTI Plus model but it offers the same quality feel that’s offered by the Mini. However, like the Audi A1 it’s only offered with the DSG transmission and while it’s relatively entertaining it’s a little more one dimensional than the Cooper S and is ultimately not as rewarding to drive for those looking for some hot hatch thrills.